Our flagship Leatherhead office is centrally situated within an attractive Grade II Listed building on the corner of Church Street and the town’s High Street. It's highly prominent position offers over sixty feet of window frontage allowing us to show case the widest variety of property for sale and to let in the area.

At the Leatherhead office we handle all aspects of residential property including sales, lettings and property management, block management, land and new homes and professional services.

The lettings department is headed by Director Nick Hutton, who is supported by Negotiators Sarah Doyle, Jackie Gavan and Ben Hayes. The lettings business has grown to now service over 750 landlords and is recognised as a market leader in the Mole Valley.

The Land and New Homes department run by Vari Bowling (Partner) is centralised at Leatherhead and deals with projects across the whole of Mole Valley, Epsom & Ewell and the district of Reigate & Banstead.

The historic market town of Leatherhead is centrally located in Surrey and forms part of the Mole Valley district on the River Mole. Thought to be of Saxon origin, this pleasant town boasts a thriving town centre with an abundance of activities and facilities to accommodate all requirements and interests. Although Leatherhead is not a large town, it boasts a surprising selection of activities and events which draw visitors from the neighbouring towns and villages.

Leatherhead’s proximity to the breathtaking Surrey Hills has proved to be the southern epicenter for literary inspiration throughout history. Jane Austen frequently visited relatives in the neighbouring village of Great Bookham whilst writing her novel ‘Emma’; ‘the large and populous village, almost amounting to a town’ as described by Austen is considered by many to be a description of Leatherhead itself. A celebration of such literary associations are exhibited in the aptly named Edmund Tylney pub in the High Street and inside the walls are illustrated with many of the great figures of the literary world who visited or lived in Leatherhead, including not only Jane Austen but also C S Lewis.

As the gateway to the magnificent Surrey Hills, marked walking routes and various paths lead from the town centre to open countryside including Box Hill, now made world famous for it’s major part in the London 2012 Olympic road cycle race.

The centrally located Leatherhead Theatre offers an extensive array of entertainment such as family shows, comedy, musicals and drama alongside the latest films. Leatherhead’s most famous resident is Oscar winning Sir Michael Caine who lives in the town and is both a patron of the theatre and the Annual Leatherhead Drama Festival.

The pedestrianised High Street makes for easy access to the town centre and Swan Shopping Centre which includes national retailers such as Boots, WH Smith, Sainsbury’s supermarket and a Waitrose Local can be found in Church Street opposite the theatre.

There are numerous recreational facilities in and around Leatherhead including the recently refurbished Leisure Centre and a Nuffield private members health club in the town centre. Nearby golf clubs include Tyrrells Wood, Effingham Golf Club, Leatherhead Golf Club and Walton Heath at Walton on the Hill. Leatherhead has its own football club known locally as ‘The Tanners’. The town also has a successful cricket club with a wide range of teams for all ages and abilities.

Leatherhead boasts the perfect balance between rural living whilst still benefitting from it’s proximity to London and the national motorway network being just off junction 9 of the M25. Heathrow and Gatwick International airports are within easy reach with Leatherhead being almost equidistant between the two. The mainline railway station takes trains from Guildford and Dorking with frequent commuter services through into central London (London Victoria or London Waterloo) with journey times of less than 45 minutes.

Leatherhead has evolved to become a successful business centre; home to many national and international companies including KBR, Unilever and Exxon Mobil. 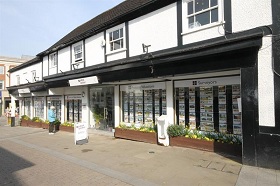 Email Us Request a valuation Reviews

Here you can log in or sign up to the members area of our website. Once logged in you can amend your personal details, add/amend/delete email alerts and access your saved properties. New property alerts are sent to your requested email address at your selected frequency once an we publish a new property or a price change takes place. To manage your alerts, click on the members icon at the top of the screen once you are logged in alternatively you can access this from each and every property.

You can register here!